Left-Wing Rants, Cigars and the Macabre -- My Memories of Rick Hautala 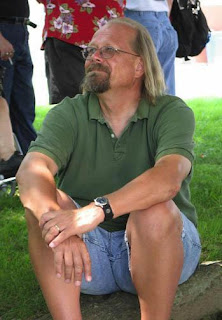 “What’s the difference between a horror writer and a pizza? A pizza can feed a family of four.”
– Rick Hautala in his acceptance speech for the HWA’s Lifetime Achievement Award, Salt Lake City, 2012

I came home from Buffalo last night to receive the sad news that Rick Hautala had died suddenly at the age of 64. This is the second such blog post I’ve written in less than a year. Like the first one, the one I wrote about the late Michael Calvillo, everything I’m about to say is true. It’s easy to say all kinds of nice things about someone who’s just died, but in these cases, it’s a given.
Very often people will bring up the fact that Rick went to college with Stephen King, but I’d prefer to set that one aside. Rick had a million-copy bestseller and he should be remembered as a standout horror author and someone who made his mark on our precious genre.
He and I shared the same liberal politics. The expression of his ideals sometimes landed him in hot soup with some of his more conservative contemporaries, though I won’t remember him as a political man per se. I’ll remember him as a man who truly cared about people, about equality, fairness, justice and peace.
Social media has made the world much smaller, but I was fortunate enough to have met Rick in person and to have enjoyed phone conversations with him as well. While he was a Necon regular, his appearance at the World Horror Convention in Salt Lake City was a true rarity. I caught up with him outside the hotel where he was enjoying a cigar and he told me that it was the first big convention he’d attended in nearly thirty years. I find it hard to imagine, but I know he kept in touch with his horror peers in other ways.
In my desk drawer I have a tape of an interview I conducted with Rick a while back. This interview will be part of a collection of interviews soon to be published. What’s important about this is Rick’s willingness to take part in the project. Let’s face it: a man in his position needn’t give a rat’s behind about my project. It isn’t something that will advance his career or sell more copies of his books. But he accepted my offer without question or hesitation, which speaks volumes about the man he was. He could easily have turned his nose up at me or not even bothered to answer. But instead he promptly gave me his home number and, when the interview concluded, he suggested that I phone him anytime I felt like chatting horror.
The horror genre is no stranger to tragedies like this one and it’s always hard to deal with it because colleagues become like a unique family. We share a passion for a niche that’s sometimes hard for others to understand, but we all have each other in that regard. When someone in the genre passes, it’s like literally having a death in the family, even if you’ve only met that individual in person a limited number of times.
After Michael Calvillo died, I made a point of contacting friends in the genre who I don’t see nearly enough just to see how they’re doing. I learned my lesson about that a while ago and Rick’s passing has cemented this philosophy. I can’t drop him a line just to say hello anymore, but maybe I’ll listen to that interview tape, just to remember all the joking around we did while conducting it, and to further appreciate what the world has lost.

Posted by Derek Clendening at 08:19